You are here: Home / Physics Lab / Exploring the Marcus Regimes in a Molecular Double Quantum Dot

An international research team, which includes University of Central Florida Professor Enrique del Barco and Christian A. Nijhuis of the National University of Singapore, has found a way to understand and manipulate the transition of charges in molecular junctions. 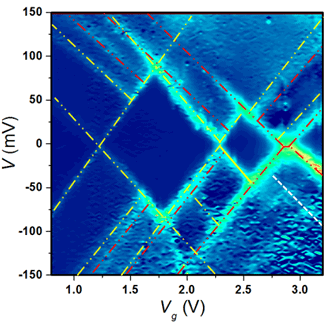 A molecular junction connects molecules to two metallic electrodes, such as gold. For electrons to flow through the junction they need to overcome a barrier. When temperature is increased, the electrons can jump over the barrier more easily.

Charge transfers dominate many chemical reactions, such as when iron rusts and turns brown. The iron loses electrons, causing rust. Iron is a metal, but the same applies to molecular reactions, known as electrochemistry. The science behind molecular charge transfer is well understood in the field of chemistry, and explained by the so-called Marcus Theory.

According to this theory, molecular reaction speeds can be tuned by increasing or decreasing temperature (known as Direct Marcus regime). However, under some circumstances, the reaction can be taken into the Inverted Marcus regime, where the reaction becomes insensitive to changes in temperature, and can jump without crossing a barrier.

Charge transfer processes are also becoming increasingly important in the emerging field of molecular electronics, where scientists aim for the smallest scale for electrical circuits, where the basic building blocks of modern electronics are based on molecules.

One example of this is molecular diodes (molecular devices capable of selecting the flow of charge current), which are of crucial importance as the basic building blocks of molecular circuitry – the future of powering our electronics.

The problem is that scientists have long seen molecular diodes behaving in either of the two Marcus regimes in ways they did not understand.

“We have seen similar molecules behaving in totally different ways, and very different molecules behaving very similarly without any apparent reason,” del Barco said. “This is highly surprising at a time where our knowledge of molecular junctions has substantially advanced. With two electrodes and a molecule in between, the charge does not flow; it jumps. But there are times where it shows a barrier, and other times it doesn’t, and this is what we’ve been working hard to figure out.”

Working closely with his colleague in Singapore, the team experimented with electric fields and temperature to see how charge flows through different molecular diodes.

Finally, they found a molecule that allowed them to explore the two Marcus regimes, by changing its temperature dependence at will.

“This is a breakthrough. If we think about this complex molecule as two different units coupled together, when the charge jumps into one unit, it generates an electric field on the other, and vice versa,” del Barco explained. “This internal electrical gating is proportional to the amount of charge in the molecule as a whole, which it increases with the voltage applied to the device, and makes the molecular diode to transit in between the two Marcus regimes. This is the first time we’ve seen such a transition in molecular electronics.”

Aside from the important implications of this discovery in the field of chemistry, it turns out that this molecule represents the first molecular example of a double quantum dot, with exciting potential in physics. This puts molecular systems in emerging technologies such as quantum information and computation in view.

Del Barco and Nijuhuis’ work, published in Nature Nanotechnology, will contribute to advancing the understanding of quantum technologies.