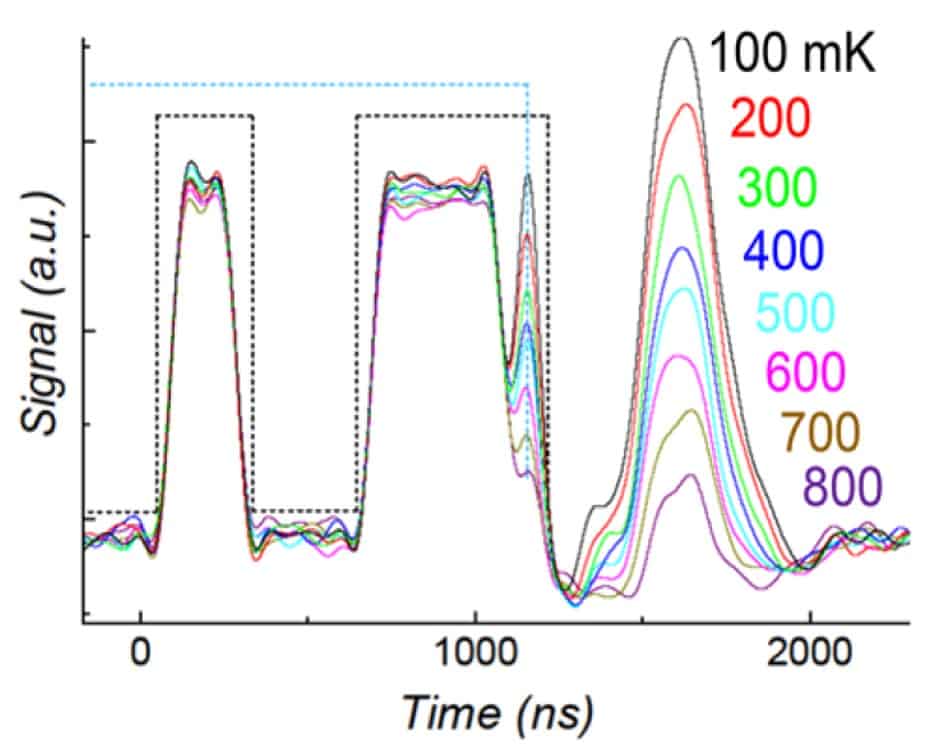 This article presents a time-resolved electron paramagnetic resonance spectrometry setup designed to work at frequencies below 20 GHz and temperatures down to 50 mK. The setup consists of an on-chip microstrip resonator (Q < 100) placed in a dilution cryostat located within a superconducting 3D vector magnet. A housemade spin echo circuitry controlled by a microwave network analyzer, a pulse pattern generator, and an oscilloscope connects to the microstrip through a series of copper, stainless steel, and superconducting semirigid coaxial lines which are thermally anchored to the different cooling stages of the fridge by means of power attenuators, circulators, and a cryogenic amplifier. Spin echo experiments were performed at a 0.5-T magnetic field on a spin 1/2 paramagnetic coal marker sample mounted on a 15 GHz microstrip resonator at temperatures ranging from 100 to 800 mK. The results show an increase in echo signal intensity as temperature is decreased until saturation as theoretically expected in reaching 99% spin polarization at 100 mK. Our technique allows tuning of the spin system in the pure state regime and minimizing dipolar fluctuations, which are the main contribution to decoherence in solid-state samples of single-molecule magnets (SMMs) – molecular spin systems that are currently being tested for applications in quantum computation. The achievement of full spin polarization at 100 mK will allow for coherent control over the time evolution of spin systems without the need for large magnetic fields (commonly used to polarize the dipolar bath at higher temperatures) and high frequencies.