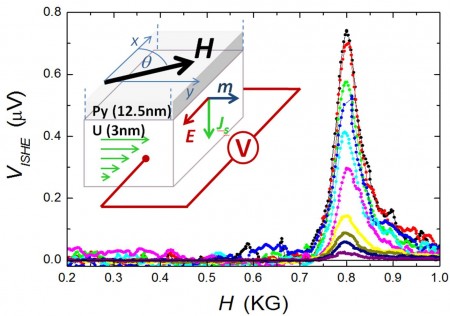 We have recently reported in Applied Physics Letters the measurements of spin pumping and the inverse spin Hall effect in Ni80Fe20/Uranium bilayers in order to study the efficiency of spin-charge interconversion in a super-heavy element. We employ broad-band ferromagnetic resonance on extended films to inject a spin current from the Ni80Fe20 (permalloy) into the uranium layer, which is then converted into an electric field by the inverse spin Hall effect.  Surprisingly, our results suggest a spin mixing conductance of order 2 1019 m-2 and a positive spin Hall angle of 0.004, which are both merely comparable to those of several transition metals. These results thus support the idea that the electronic configuration may be at least as important as the atomic number in governing spin pumping across interfaces and subsequent spin Hall effects.  In fact, given that both the magnitude and the sign are unexpected based on trends in d-electron systems, materials with unfilled f-electron orbitals may hold additional novelty for spin physics.